From 27 to 30 April the Department of Composition and Improvisational Performing Arts will hold the first composition and music technology dedicated festival, COMMUTE#1, featuring works which have seen the light during the current academic year, gathered together as six independent, thematic concert performances.

"For years we organised several concerts that were either independent or formed part of different festivals. Yet this spring we realised, it would make much more sense to bring all of them under the same umbrella," explains Paolo Girol, lecturer of the audiovisual composition and chief coordinator of the Department of Composition and Improvisational Performing Arts. "In addition to that, one of the main artistic aims of the festival is not only to bring together the student works, but to mix them with the works by renowned professionals and to perform them also with mixed ensembles of student and professional players. Moreover, we are "commuting" different styles of music and different art domains, such as baroque and live electronics as well as music and dance. Since the latter is not taught at EAMT, we are collaborating with the  student choreographers from Tallinn University, whose contribution makes the festival even more versatile and hopefully also more attractive in the eyes of the audiences.“

Versatility reflects also in the selection of venues as the concerts take place not only at EAMT, but in Sakala3 (former theatre No99), at „Sõprus“ cinema and even St Nicholas church. The festival features several world premieres and in the frames of the concert on Sunday, 29 April, the winners of the EAMT 3rd Competition of Audiovisual Compositions will be announced and presented. This year 45 submissions from the EU Countries, Israel, Canada, USA, Mexico, Argentina, Russia, China, South Korea and Australia were received. The head of the competition jury is Brett Battey, Professor of Audio-visual Composition at De Montfort University, Leicester, UK.

More detailed info on festival at Commute.art
Commute#1 on Facebook 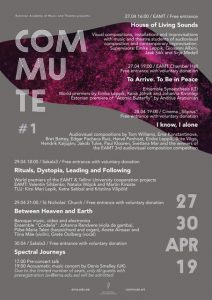 Vaata lisaks
The Drama School of EAMT is the largest theatre school in Estonia, where actors, directors and dramaturgy students are trained. As Estonians are considered to be ‘theatre people’, Drama School has always had an important place in Estonian culture, and events taking place at the school are at the centre of the public’s attention. More info: www.lavakas.ee